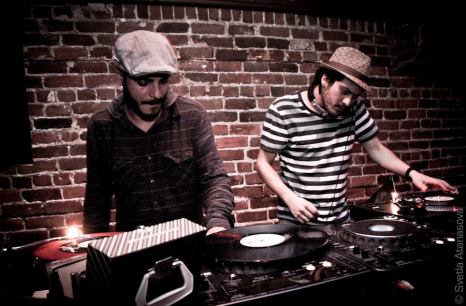 Created in August 2012 by Marcus Freitas (Dj Mks) and Wallace Roza (Dj Skambo), who are known as the « Tupi Collective ». They’re deejays who have started a music project that explores the rhythms of Brazilian music (i.e. Forró, Maracatu, Samba-Soul, Samba Rock, Hip-hop, and Funk between others).

The duo are vinyl collectors that have invested their time in bringing to Montreal their collection of Brazilian records, that explores all genres of their native grooves. From reggae to samba, to hip-hop to forró, plus an amalgamation of new and old school Brazilian rhythms, the collective mixes a diaspora of styles in their sets which takes their fans on a tropical journey. Their avid listeners and fans are very enthusiatic about their projects and parties, displaying an array of dialects that are a lot more than just bossa nova and samba rhythms.

The concept, goes beyond their monthly parties at Le Bleury Bar à Vinyle, which includes showcases such as the Weekend du Monde Festival in 2013, Nuit Blanche Festival 2014, 24hs of Vinyl project, gigs at La Sala Rosa , Divan Orange, Le Bobards, Waverly, and the infamous Casa del Popolo, which is an institute in Montreal’s independent scene.

To be in contact, our facebook page has some great songs shared everyday, as our next dates and projects updates.
http://www.facebook.com/tupicollective